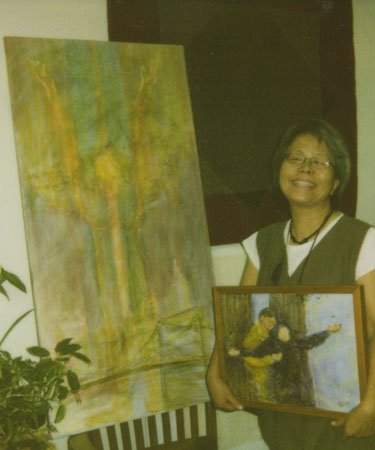 In recognition of Asian Pacific Islander Month May 2011

Public Health is in an ongoing process of despair and healing. We need to be aware of and prepare for both. How can we work effectively for the public well-being while at the same time preserves our own individual well-being?

In the spring of 2000, I took up a paintbrush after not using one for 20 years. I had enrolled in an art class at Vista College, now Berkeley City College. I missed the first day of class as my mother-in-law had passed away due to a house fire that very week. I decided not to drop the class, and I’ve taken various art classes ever since. The healing power of art is beyond words. I’ve especially had to struggle with two languages and cultures on a daily basis.

After 9/11 I did several acrylic paintings using images from newspaper pictures from the World Trade Center and the Pentagon. The title of the small painting is “If I could catch them, I would”. The large painting was not actually completed at the time, and now I have sketched “the tree of hope” image of a lone pine tree. This is the only tree which survived in a pine forest of over 70,000 trees in Rikuzentakata after the 3/11 Tsunami which occurred after the magnitude 9.0 earthquake in Japan this year. I call this painting “the tree of hope”.