Why do people do what they do?

I am public health clinical nurse specialist (PHCNS-BC), who uses a framework of case management and visual art practice. A board-certified public health clinical nurse specialist (PHCNS-BC) by American Nurses Credentialing Center (ANCC). Unlike nurses at hospitals, clinics or in home care, she works mostly in prevention. She assesses health conditions and works with health-related service providers and community organizations in order to maintain the well-being of individuals and families, especially women in periods of transition.   She believes that nursing is a form of art which requires extensive knowledge and skills as well as the courage to leap at new challenges. She sees her art works as means to reach out to people whose lives are divided by different languages, cultures, and expectations. 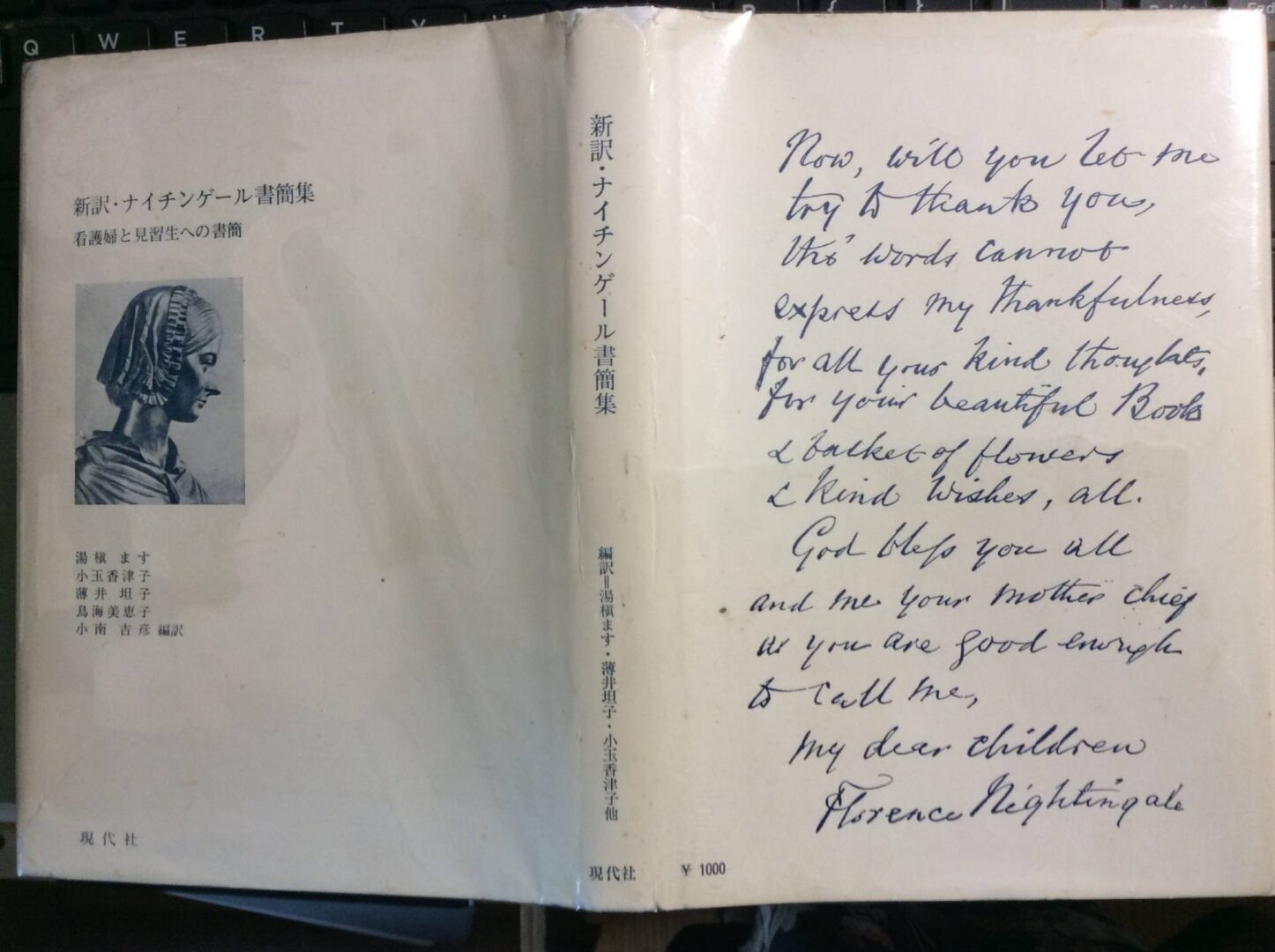 Photo of book by Nightingale

THE BLUE CLOUDS OF HOPE

Published for 2010 International Year of the Nurse

The Blue Clouds of Hope

A long time ago, my grandfather wrote this poem (a tanka) for me.

When I asked for permission to study nursing, first he refused. It was still the time when a girl’s happiness was to be a wife and a mother, not to be a working woman, just as in the time of Florence Nightingale. My winning argument was that I was studying nursing not to become an independent woman, but rather to be a knowledgeable wife and mother for my future family. My grandfather may never have realized my dream would extend beyond the islands of Japan to the “new world”.

But I will never know the dreams of his youth. Could he have dreamed of crossing the ocean? He had a younger brother, Giichi (George) Tanaka, who left Japan in his youth and lived in New York. They corresponded with letters, occasional newspaper clips of poems and short stories from Giichi, but they never visited each other. Great- uncle Giichi wrote me how proud he was that I would become a nurse, and that he would wait for my visit to the U.S. even though he might to be a hundred years old. His physician assured him to that he would live that long, he wrote.

In spring of 1978, I left Haneda airport for my first international flight to the U.S. for a three months stay. The first two months would be in English as Second Language School in Berkeley, then a cross country train ride to the East Coast for a home stay in Keene, New Hampshire, and then finally New York!

Through the years, I’d lost contact with Uncle Giichi, but wrote a letter of my coming to New York. In Keene, I received the letter from Mrs. Tanaka (Giichi’s wife), telling me that Giichi passed away two years prior at eighty-one years. I visited her at their apartment on Cummings St. His writings, poems, essay, short stories, were still in a cardboard box. I hand copied some of them as she declined to pass them to me even though she could not understand any of them.

I came back to a heavily secured new Narita International Airport. My father and my mother in kimono greeted me at the gate. Giichi was her uncle. She said, “I am glad for him that he did not see you, visiting like a free bird. His writings were not so good anyway”. She mumbled as if she was comforting herself and hiding her disappointment of leaving his writing behind.

I resigned my nursing job prior to this trip, so I had time to digest my experience during the summer for my next journey to Israel. In September, I went with my Japanese nurse-midwife colleagues to attend the International Nurse-Midwifery Conference in Jerusalem. It was an eye-opening experience to be in the Holy Land. Without it, I am not sure how I could be what I do now.

Many things have changed since, but one thing remained in me. My promise to my grandfather: I became a nurse to be knowledgeable to care my family. Now, I work as a public health nurse, but I like to introduce myself as a nurse-midwife as well even though I no longer catch babies. Working with young families who are struggling daily tasks of parenting with limited-resources, I constantly have to ask myself basic, fundamental questions. “Why do people do what they do?” “Why do I do what I do?”

My grandfather and great uncle Giichi did not wait to see me as a nurse, but their dreams remained and will hopefully pass on to another generation of nurses to remember why they wanted to be nurses.

Published for 2010 International Year of the Nurse

TWO PHOTOS FROM THE MUSEUM

JOURNEY WITH FAMILIES IN TRANSITION